Conan O'Brien Shares His Acting Debut In ‘Sharktopus vs. Pteracuda' 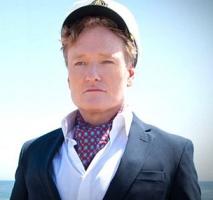 As expected, Conan doesn't last long in the Roger Corman film. But the quality of the effects is probably most surprising of all -- and not in a good way.

Syfy has been promoting the cameo with billboards that jokingly celebrate the cameo as a "career-defining performance" worthy of ""Emmy and/or Oscar and/or BAFTA consideration."

'Sharktopus vs Pteracuda' will air on August 2.