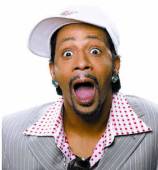 Comedian and rapper Katt Williams was arrested for breaking into a home and stealing thousands of dollars worth of jewelry and coins on Sunday night, according to police.

The entertainer has been charged with burglary and criminal trespassing for breaking into a residence with a crowbar and stealing roughly more than $3,500 in rare coins and cash.

The police report states Daniel Broach, an employee at the estate where the 38-year-old is staying, called 911 around 9 PM to report a break-in at a guesthouse on the property.

Williams was released on bond Monday night after bail was set at $41,150. As he was released from the Coweta County Jail, he called the alleged burglary "a misunderstanding between me and two stupid detectives."

But it's just the latest hiccup for Williams, who was sentenced to three years' probation in 2006 for carrying a gun in his briefcase at Los Angeles International Airport. He was also briefly jailed in 2008 after New York police officers discovered three guns in his car after pulling him over for driving without a license plate.

Williams told the Coweta County Magistrate Judge that he was "in the middle of a birthday party" when arrested.

"I'm one of the most honorable people in my profession," he said with a straight face.

Williams is known for his roles in 'Friday After Next' and 'Norbit'.