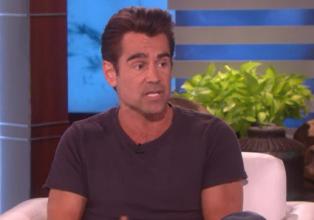 Colin Farrell appeared with Ellen DeGeneres to celebrate his 10 years of being sober and turning 41 later this month.

During a round of the 'Celebrity Confession' game, the actor recalled a funny story about manscaping his "retro bush," as he described it before a scene.

"I was doing my first American film 'Tigerland', I think in the year 2000," he began. "There was a sex scene in it, and I was very nervous because I'd never done a sex scene. Now they're just a walk in the park... not really. They're always uncomfortable."

"I was obviously so nervous that I lost my mind for a second because I opened my dress and I said, 'Is it a bit…?,'" he asked director Joel Schumacher. "Because, like most men, I had what you could refer to as 'retro bush.'"

So he got to work with a beard trimmer.

"I don't know if they ever used the beard trimmer after," he quipped. "I went into my trailer, I got a bin and I put it there. I was nervous and I trimmed the right side a little bit, and obviously I had to match it, so I trimmed the left."

But in the end, "I didn't get my full frontal after all."