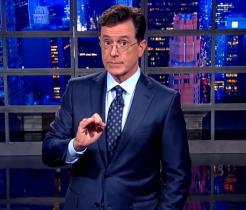 But it was the comedian who destroyed Trump in the rest of his monologue as he cracked jokes about the size of the President's penis and a diagram with House intelligence chairman Devin Nunes where the sun don't shine.

"Check out the timing on those two tweets," Colbert said about Trump's tweets about the Russia connection being a "hoax."

"He completed the sentence nine minutes later. That second tweet was 23 words. That means be types two and a half words a minute."

"He's got really slow thumbs or a very talented penis. Obviously, those letters are really small. You want something tiny to be able to type it out with."

Later, taking on Devin Nunes, Colbert put him squarely with his head in Trump's ass.

"He's really in Trump's inner circle," he quipped. "And no matter where this investigation leads, no matter what we find out, one thing is true: Nunes isn't coming out of this smelling like a rose."