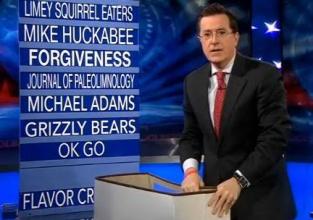 Stephen Colbert mocks the GOP's healthcare plan and mocks Trump for not wanting to put his name on it, unlike everything else he does.

"Anyone who has spent 18 hours trying to pass something knows what you get in the end," he says of the long debate over the plan.

"As the White House is asking, please don't call it 'TrumpCare'. He just doesn't want you to call it TrumpCare. That is one thing about which TrumpCare," says Colbert.

"Fact: According to one GOP member, pretty much anything with the pejorative suffix on it - 'care' - is going to be viewed unfavorably by conservatives. Yes, conservatives don't want to be associated with caring. That's why the official mascot for the repeal is SuckIt, the Don't Care Bear."

"Or maybe Trump just doesn't want to associate his name with something no one likes. Although that has never stopped him before."