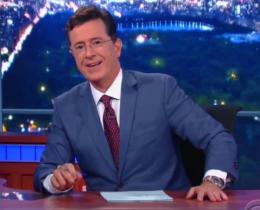 Stephen Colbert may no longer be doing 'The Colbert Report' but he's certainly looking to capitalize on his old fan-base.

CBS has announced that 'The Late Show with Stephen Colbert' will air live on CBS after the scheduled September 26 and October 19 presidential debates between Hillary Clinton and Donald Trump.

The program will also air following the Tim Kaine-Mike Pence debate on October 4.

Colbert aired live after the political conventions and has been looking to make the 'Late Show' more topical. The host even so far as to recently include his Comedy Central character on the late night show.

To get around Comedy Central's intellectual property, he called it "Stephen Colbert's identical cousin."