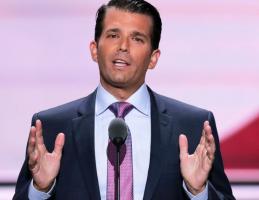 Seeking to promote his father's campaign, the younger Trump posted a tweet featuring a bowl of Skittles with a warning: "If I had a bowl of skittles and I told you just three would kill you. Would you take a handful?"

The post was criticized on social media, with one person pointing out the photographer who took the photo that Jr. used without permission was in fact a refugee himself.

Wrigleys America, the company that makes Skittles, even weighed in.

On the 'Late Show', Colbert corrected both Trump Jr.'s sentence structure and his math.