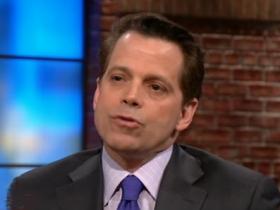 Stephen Colbert breaks down White House Communications Director Anthony Scaramucci's on the record and off the wall call to The New Yorker's Ryan Lizza.

"I ask these guys not to leak anything and they can’t help themselves," Scaramucci complained to Lizza. "You're an American citizen, this is a major catastrophe for the American country. So I'm asking you as an American patriot to give me a sense of who leaked it."

Scaramucci became convinced White House Chief of Staff Reince Priebus was behind the leak and ranted: "I fired one guy the other day. I have three to four people I'll fire tomorrow. I'll get to the person who leaked that to you. Reince Priebus — if you want to leak something — he'll be asked to resign very shortly."

"Reince is a f—-king paranoid schizophrenic, a paranoiac," he railed.

Scaramucci also slammed Steven Bannon, the president's chief strategist, and said: "I'm not Steve Bannon, I'm not trying to suck my own c--k."

"What I want to do is I want to f--king kill all the leakers and I want to get the President's agenda on track so we can succeed for the American people."