Cobie Smulders Opens Up About Battle with Ovarian Cancer 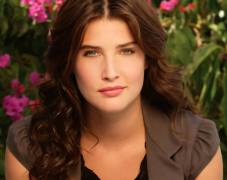 ) opens up about her private battle with ovarian cancer in the May issue of Women's Health.

The 33-year-old actress reveals she was diagnosed during the third season of 'How I Met Your Mother', when she was only 25.

"I had tumors on both my ovaries and the cancer had spread into my lymph nodes and surrounding tissues," she says.

Over the course of the next two years, Smulders underwent multiple surgeries to remove the cancerous tissues.

About a year later, she gave birth to her daughter with husband Taran Killam. They welcomed their second child together, a boy, in January.

"I don't think I'll ever feel like I'm cancer-free," she says.

"Now that I'm five years out, I'm trying to think of it as a positive thing and what can I learn from it. And if I can create more awareness, I'll do it."