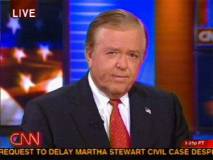 Lou Dobbs says shots have been fired at his New Jersey home and he believes it is connected to threatening phone calls he received earlier this month.

Dobbs, who is known for his fervent views on US border enforcement, told listeners of his radio show that the incident is part of an ongoing assault against anyone who opposes leniency toward illegal immigrants.

"They've created an atmosphere and they've been unrelenting in their propaganda," Dobbs said. "Three weeks ago this morning, a shot was fired at my house where I live. My wife was standing out and that followed weeks and weeks of threatening phone calls."

"I now - it's become part of a way of life - the anger, the hate, the vitriol, but it's taken a different tone where they've threatened my wife. They've now fired a shot at my house while my wife was standing next to the car. It's become something else."

"If anybody thinks that we're not engaged in a battle for the soul of this country right now, you're sorely mistaken," he said.

"My wife has now been, and I have been, shot at, our driver, my house has been shot and hit. An investigation continues. I've had bodyguards now and you know what, I'm not in the mood to put up with little fools like Geraldo Rivera."

"It's time that we really awaken to what is happening in this country," Dobbs said. "It is ugly, it has to stop, and we have to find the courage to elect congressmen and senators and, yes, presidents who will speak truth, not pander, and not play politically correct games to ensure that truth is the last option."

New Jersey police is investigating the incident: "It's a shot fired that struck the house," says Sgt. Steve Jones. "It struck the siding and then fell to the ground. We're not sure what the intended target was. It's still under investigation."

You can listen to audio from Dobbs' show below: