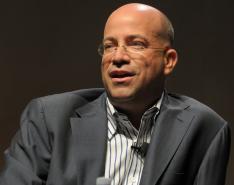 CNN's Jeff Zucker is responding after taking it on the chin from Fox News chairman and CEO Roger Ailes that CNN was "out of the news business."

"I guess he's going to do whales a lot," Ailes said of CNN's successful killer whales documentary 'Blackfish'. "If I were Discovery, I'd be worried."

But Zucker says while CNN plans to focus on more non-fiction series that doesn't mean it's not going to focus on breaking news.

"CNN is not and never will abandon our first and fundamental brand equity, which is news and breaking news," Zucker said at Television Critics Association press event. There is no network covering American news as seriously and substantially as CNN."

"It's the most important thing we do. We want to remain essential in news."

"It confirms what we've known all along," he said. "The Republican Party is being run out of News Corp headquarters masquerading as a cable news channel."

Zucker said CNN's upcoming non-fiction series included 'Death Row Stories' and 'The Sixties: The British Invasion' that will air before the 50th anniversary of the Beatles performance on 'The Ed Sullivan Show'.

However, he shot down reports of the network looking to acquire Jay Leno -- after he leaves NBC -- to get into the late night game.

"That's really not a priority for us at this time," he said. "We have some other things I'd like to concentrate on first. That's not in the cards anytime soon."

"I have a longtime relationship with Jay -- I think he's a terrific talent -- but that's not where our priorities are."