CNN Reassigns Reporter To Moscow After She Calls Israelis 'Scum' 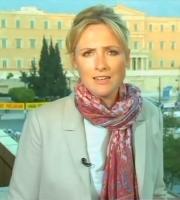 CNN has reassigned Diana Magnay to Moscow after the Middle East reporter referred to a group of Israelis as "scum."

Magnay had just finished a live report as a group of Israeli's watched the bombardment of Gaza around her and cheered.

"Israelis on hill above Sderot cheer as bombs land on Gaza, threaten to 'destroy our car if I say a word wrong.' Scum," she wrote on Twitter after getting off the report.

CNN said Magnay was only talking about the group of Israelis that threatened her but, soon after, reassigned the reporter to Russia and apologized to anyone she offended.