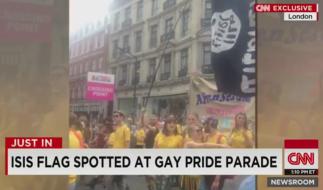 CNN's fact checking department must have been off for the weekend as the network ran with the headline that an ISIS flag was spotted at London's gay pride parade.

CNN International reporter Lucy Pawle made the "discovery" and engaged in a serious discussion about how she came across the flag on Regent street and what its appearance at the parade meant.

"This man was waving what appeared to be mimicking -- bad mimicry but a clear attempt to mimic -- the ISIS flag," said Pawle. "The black and white flag with the distinctive lettering."

"If you look at the flag closely, it's clearly not Arabic. In fact, it could be could be gobbledegook but it's very distinctive, the ISIS flag."

"I seem to be the only person who has spotted this," she said amazed. "And nobody is raising any questions or pointing it out so I immediately to an event organizer. I also spoke to the police nearby."