CNN's Jake Tapper Shares How He Got Burned By Hillary Clinton 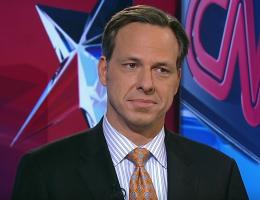 CNN's Jake Tapper tells Conan O'Brien about the time he got burned by Hillary Clinton.

It took place in 2009, when Tapper wasn't sure how to refer to the just announced Secretary of State.

"And she said 'Well, I prefer either one to what we call you when you're not around.'"

"Wow, burn," says Conan. "And then she dropped her mic and walked off the stage."