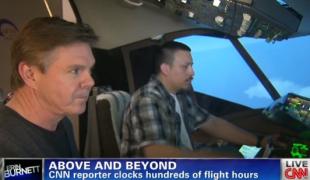 Mitchell Casado, the Canadian flight simulator instructor who regularly appeared in the cockpit on CNN's coverage of missing Malaysia Airlines Flight 370, has been fired.

uFly, the company that owns the simulator frequently featured on CNN, has fired Casado because it says he regularly showed up late to his job and "shamed Canadians" with his unprofessional attire on television.

Company owner Claudio Teixeira says the final straw came when Casado didn't show up for work on Tuesday, when customers had booked the simulator.

"This is not the first time. He's been warned before," he tells AP. "Even though I let him be on TV he shamed us Canadians and shamed my company with the way he was dressing like he was 15 years old."

"People were complaining that it wasn't professional at all. If you go to any plane you don't see them in shorts and sandals. It made us look very bad all over the world."

CNN's Martin Savidge and Casado logged many hours reporting from the cockpit of the simulator that can run as a same model of the plane that is still missing.

Casado has refused comment but at one point on social media said: "My boss had me training a new guy the last few days, and now that he can do my job, and CNN left, he fired me. That's Ufly."

It's not clear whether the firing will affect his appearances on CNN. However, at least for the moment, that doesn't matter since CNN has stopped broadcasts from the simulator as it loosens its grip on the coverage around MH370.