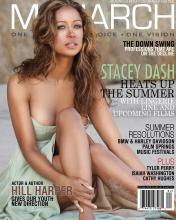 The 47-year-old best known for starring alongside Alicia Silverstone in 'Clueless' will appear as a commentator on the network in both daytime and primetime.

Dash, who in recent years has become an outspoken conservative, found herself in hot water with the black community in 2012 after she endorsed Mitt Romney over Barack Obama.