Clippers' Donald Sterling Claims He Was 'Baited' Into 'Terrible Mistake' 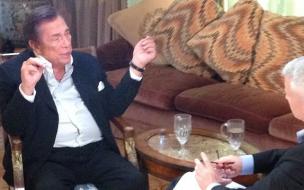 In a sit-down interview with Anderson Cooper on CNN, Los Angeles Clippers owner Donald Sterling said he was sorry but said he was "baited" into making the racist comments that banned him for life from the NBA.

"When I listen to that tape, I don't even know how I can say words like that," said Sterling. "I don't know why the girl had me say those things."

"You're saying you were set up?," Cooper asked.

"I'm not a racist," Sterling continued. "I made a terrible, terrible mistake. And I'm here with you today to apologize and to ask for forgiveness for all the people that I've hurt."

Asked why it took him so long to apologize, the 80-year-old Sterling said he was "emotionally distraught."

"The reason it's hard for me, very hard for me, is that I'm wrong. I caused the problem. I don't know how to correct it," he said. "I'm a good member who made a mistake and I'm apologizing and I'm asking for forgiveness."

But while saying he was sorry to Magic Johnson, the man this began with, Sterling managed to insult the former NBA star again.

"If I said anything wrong, I'm sorry," Sterling said. "He's a good person. I mean, what am I going to say? Has he done everything he can do to help minorities? I don't think so. But I'll say it, he's great. But I don't think he's a good example for the children of Los Angeles."

As for being recorded by his mistress, he said: "I don't know. An 80-year-old man is kind of foolish, and I'm kind of foolish. I thought she liked me and really cared for me."

"I guess being 51 years older than her, I was deluding myself. I just wish I could ask her why, and if she was just setting me up."