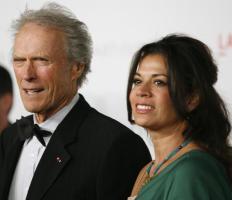 After filing for legal separation and then changing her mind last month, Clint Eastwood's wife has now filed for divorce.

Dina cites irreconcilable differences in her filing and asks for spousal support as well as physical custody of their 16-year-old daughter, Morgan.

The couple, who have been married since 1996, originally met when she interviewed the then 66-year-old actor for a TV news segment.

Clint Eastwood, 83, was previously married to Maggie Johnson from 1953 to 1984. Although he is father to six children from five different relationships.