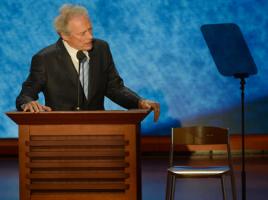 Clint Eastwood may have made the day of countless viewers and attendees at last week's Republican National Convention, but the actor and director has been left out of the party's official video from the gathering without a solitary mention.

But it does not include so much as glimpse of Eastwood or the empty chair that was the talk of the convention.

Meanwhile, President Barack Obama says he wasn't offended by the skit, which saw Eastwood "interview" him.

"I am a huge Clint Eastwood fan," Obama tells 'USA Today'. "He is a great actor, and an even better director. I think the last few movies that he's made have been terrific."

"One thing about being president or running for president -- if you're easily offended, you should probably choose another profession."

As for any empty chair's at the Demo Democratic National Convention in Charlotte, North Carolina on September 4, Obama says: "I think we'll be playing this pretty straight."