Clean-Shaven Joaquin Phoenix Returns To Letterman With An Apology 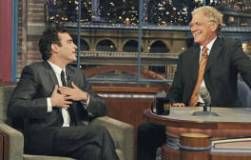 A clean-shaven Joaquin Phoenix returned to the scene of his most famous television appearance as he sat down for an interview with David Letterman on Wednesday night.

Phoenix acknowledged that his wacky appearance last year was nothing more than an elaborate piece of performance art, part of his fake documentary, 'I'm Still Here'.

Letterman opened the interview by telling Phoenix that he had always liked him and been impressed with his talent.

"And then a year and a half ago, you come out and, honestly, it's like you slipped and hit your head in the tub," Letterman said, drawing a laugh from the actor.

"Frankly, when I heard about it later, was surprised that anybody had believed it," he said. "And then after seeing you here — first of all, really all I care about is me in this. Now, did I know anything about this? Was there a script that you and I were working with?"

Phoenix said Letterman didn't know about it -- despite one of his staff writers commenting otherwise last week. The comedian even played a clip of the moment when Phoenix took off his sunglasses, got out of character at the end of the interview and thanked Letterman for doing a "good job", but the host maintained he knew nothing.

"I was eager to thank you for the opportunity and I was really eager to get off the show," he said.

"You've interviewed many, many people and I assumed that you would know the difference between a character and a real person, so - but I apologize," Phoenix said. "I hope I didn't offend you in any way."

Letterman replied, on the contrary, that the chance to lob jokes at Phoenix was like batting practice.

"Oh, no, no, no, I was not offended," he said. "I'm telling you, it was so much fun. It was batting practice, you know what I mean? Every one of them was a dinger."

In other words, Letterman had an idea he was being tossed softballs. Just that they didn't have a script.

"We'd hoped to come on a talk show," Phoenix said with a laugh, "and I was looking for a beat down, and I got one... I want to thank you for that."

Phoenix added he and Affleck had wanted to make a movie that "explored celebrity and the media and people who consume celebrity." He claimed he had gotten the idea from "watching a lot of reality shows. I was amazed people believed them… The acting was terrible."

"Now I want some money," Letterman deadpanned, "a million dollars for all the promotion — we want something for that."

Phoenix offered, "We've made 75 cents on this movie."

"That's not my problem," replied Dave.

Check out the complete Joaquin Phoenix interview in two parts below: