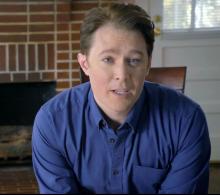 Clay Aiken isn't mincing words when it comes to judges on the 'American Idol' table.

"Watching American Idol for the first time in a decade. You never know what you've got til it's gone. Well... now I know why the ratings are down," Aiken said on Twitter about Jennifer Lopez (photos

"Oh good Lord... those boring ass responses from the judges? Where is Simon when you need him!? That guy need a hook to pull him off stage."

"It's VERY clear now that Simon Cowell was the reason American Idol was a hit," said the one-time contestant who placed second. "I've watched root canals more entertaining than these judges."

"When you really love something you only want the best for it, and you have high expectations from those you know are capable of it," he explained.

The judges during Clay Aiken's season, the second of the show in 2003, were Simon Cowell, Paula Abdul and Randy Jackson.

Fox has already announced that this will be the final season of the long-running singing competition.