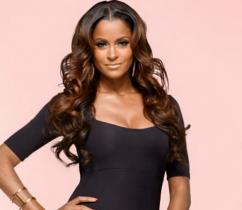 "I have no knowledge of Jamie with Katie at all," the former 'Real Housewives of Atlanta' told ET. "I've never seen them together. He's never told me he's dating her."

"I don't have the knowledge of this being fact. I don't. I misspoke," she said.

"A lot of times, I get asked questions about celebrities—some I know, some I don't. A lot times we just give a safe kind of generic answer. Sorry to not have this bombshell story, but I cannot confirm them."

"I hate that this has blown up like this, and I feel like a lot is being put on a three-second clip. I just want my friend to be happy with whoever he's with, but I don't even want to know any more!" she said. "It's none of my business, and again, I've never seen them together."

This after Jordan confidently said just earlier this week that the Foxx was "very happy with her."

Sounds like Claudia Jordan received a talking to from her A-list friend.