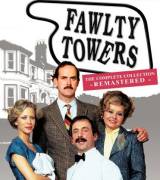 'Fawlty Towers', the classic 1970s British comedy starring John Cleese, has been remastered and is being released -- with commentary from the actor himself -- to celebrate its 30th anniversary.

Based on a hotel Cleese stayed in when he was in the seaside town of Torquay on the English Riviera, the show centered around an establishment called 'Fawlty Towers' and its short-fused owner, Basil Fawlty.

The often intricate plots revolved around Fawlty as he tried to make his guests feel right at home but it almost always ended with our hilariously unfortunate friend ripping his hair out by the time the end credits rolled.

The comedy featured rather intricate plots for its time with writers spending weeks fine tuning the details of an episode -- unlike the fast production cycles on most shows today.

"When Connie Booth and I wrote them we took about six weeks to write each episode, which is unheard of," Cleese tells Reuters. "People who care a lot spend 10 days, most people do it in a week. But the fact is, we used to write 135 to 140 pages in an episode."

"There was so much in the shows that people could watch them a lot of times because they would forget the things that are in them. And in the character Basil we nailed a certain kind of English lower-middle-class type who people are aware of and who, I think, does exist in quite a lot of people."

Like many fans of the series, the 'Monty Python' star wishes they could have gone beyond the short run of two seasons but he believes it may have diluted the quality of the episodes.

"Someone asked me once 'Did you enjoy it?' and I said there wasn't time. It was incredibly stressful trying to learn those 135 pages in five days. That's a lot of learning and five days is not enough. What Connie and I felt is that when we had done the second season, well that's the best we could do and if we try and do any more people will probably say 'Well, that was really quite good but it wasn't as good as the others.'"

And Cleese may be right. Despite filming only twelve episodes, the show is consistently regarded as one of the best British television sitcoms and took home the award for top television series of all time from the British Film Institute in 2000.

So what's new in the digitally remastered DVD release? Along with the much improved video quality you'll notice almost right away, the three-disc anniversary set includes Cleese's audio commentaries on all twelve episodes, outtakes, a visit to the town of Torquay, commentary by directors John Howard Davies and Bob Spiers and interviews with castmembers Prunella Scales, Connie Booth, and Andrew Sachs. It's currently available at Amazon for $34.49.

Finally, before we spill the details on our own contest, we should point out that the BBC is running a lookalike contest which lets you post a photo of anything that reminds you of Fawlty Towers -- from your pet dog to your parents. We make mention of it because John Cleese will be selecting the winners himself. Check it out on Facebook by searching for Fawlty Towers.

No newsletter subscriptions or complicated entries here. Simply use the 'Send to a friend' link below to share this story with a friend and your email will be automatically noted and entered into the hat!

We've got FOUR 'Fawlty Towers' remastered DVD box sets to giveaway so you have a great chance of winning. Please make sure your email address is accurate as that's the only way we can get in touch with you. Open to residents of US and Canada. The contest ends on November 15, 2009. Full rules and details available here.

This contest is now closed. Winners will be announced on November 23, 2009.

The winners have been drawn. Please check your email to see if you were a contest winner. As mentioned, we must hear back from you by the end of the week. Thanks for entering!