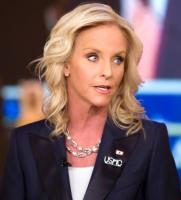 ) after the actress compared online bullying to being in a war.

Paltrow made the comparison at a Code Conference earlier this week.

"It's almost like how, in war, you go through this bloody, dehumanizing thing, and then something is defined out of it," she said.

But the wife of war veteran and senator John McCain is attacking Paltrow for her remarks.

"She is a joke. Her life is like taking bullets for a soldier. What a joke!," the 60-year-old said on Twitter.

"My 2 sons serving in the military should talk to her. Perhaps Gweneth Paltrow should go out on patrol with some soldiers. Kind of like a Red Carpet in her mind I guess!"