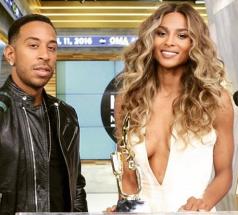 ) refused to say her ex-fiance Future's name while announcing the 2016 Billboard Award nominees live on Monday.

The singer, who is now engaged to NFL player Russell Wilson, was reading the list of nominees with Ludacris when she stopped.

Ciara was in the middle of the nominees for Best Rap Artist when she reached the name.

Fortunately for her, Ludacris jumped in to say the name before Ciara rounded out the category.

Ciara is in the midst of a defamation lawsuit against her Future after he called her a "bitch with control problems." They shared a 23-month-old son together.

She ended their engagement three months after the singer gave birth after the rapper apparently cheated on her while he was on tour.