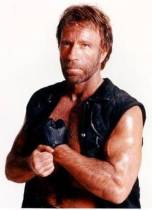 Chuck Norris stars in a new spot for 'World of Warcraft' that debuted this past weekend.

In the ad, titled 'Hunter', the announcer explains: "There are 10 million people in the World of Warcraft, because Chuck Norris allows them to live."

As for whether the action star had trouble filming the ad, game developer Blizzard jokes "Chuck Norris didn't break a sweat filming the newest World of Warcraft television spot."

"Instead, he made the director cry and then cooled himself with the tears."