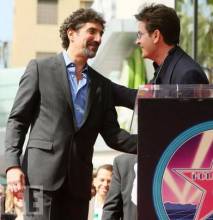 As Charlie Sheen continues his 'Violent Torpedo of Truth/Defeat is Not An Option' tour, executive producer Chuck Lorre is working on rebooting 'Two and a Half Men' without its star.

Lorre is said to be developing a script that would reboot the hit series with a new direction and an increased role for Jon Cryer alongside a new character.

The news may come as a violent torpedo of truth for Sheen, who has expressed his desire to return to the series since he was fired and filed a $100 million lawsuit against Lorre and Warner Bros.

With CBS' upfront presentation scheduled for May, Lorre and CBS are ramping up efforts to solidify the series' status for next season.

The new character has not yet been cast but it's safe to say the actor would not be making the same $1.2 million per episode that Sheen was.

Speculation has ranged from John Stamos to Woody Harrelson and Bob Saget.

While others have wondered whether a guest of the week scenario, or multi-episode arcs, would work for the comedy.