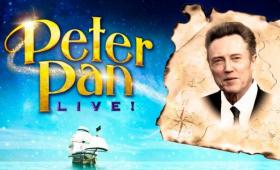 "It's very scary," says Walken. "You know, it's live. It's like a football game. You get ready and don't know. I've never had to talk about stuff before it's done."

"You either see it or you don't see it. But it hasn't happened yet so we can't talk about it."

Walken said he sings and dances with Allison Williams in the special while swordfighting.

'Peter Pan Live' (teaser) will air on NBC on December 4, a year from its successful broadcast of 'The Sound of Music Live!'.