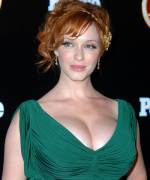 ) may play a working mother on 'Mad Men', but the actress says she's not really in going the same route with husband Geoffrey Arend.

"That's where my motherly nature comes in -- we got a puppy, and that's my idea of starting a family," Hendricks tells Health magazine.

"We've decided that we are not really interested in having children."

"It seems like it's expected that you'd want to have kids," she says.

It's just very normal for people to say, 'Well, when you guys have kids...' And then when I say, 'Actually I don't think we're going to do that,' people will say, 'Oh, you say that now.'"

"It doesn't bother me, though. And, you know, there's a small chance I could change my mind."

'Mad Men' returned with the first half of its final season this Sunday with the lowest ratings since the show's second season. Viewers are probably holding off catching up until the final episodes planned to air in 2015.