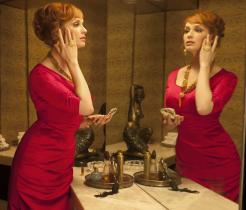 ) may have shot to stardom thanks to her role as Joan Harris on 'Mad Men', but the buxom actress reveals that her agency actually dropped her when she accepted the part.

"They said, 'It's a period piece, it's never going to go anywhere'," she tells the Guardian. "'We need you to make money and this isn't going to make money.' They ended up dropping me."

"I had been on several shows that were meant to be the big ones, that would go on forever, and they didn't," she explains. "So there was no sure bet."

'Mad Men' ends its next year and the cast recently completed shooting the series finale. Hendricks says the cast drank and reminisced until 8 AM the night after filming.

"We all just stuck around," she says. "We didn't want to leave."