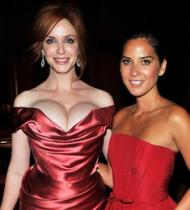 ) are the latest victims of alleged phone hacks.

The 'Mad Men' star has confirmed that hackers broke into her cell phone and leaked personal photos (uncensored link).

Although she denies that the topless photo in the set is hers.

"Christina's phone was in fact hacked and photos were stolen," says Hendricks' rep. "The proper authorities have been contacted in hopes of rectifying this situation. The topless image is fake and not an image of Christina."

Meanwhile, Olivia Munn hasn't commented on the leaked photos (uncensored link) except with a post joking "if you ever hacked my phone, these are the photos you'd find," along with shots of a kitten and a baby.

Her set of photos includes poses in lingerie with one completely nude photo.