Christina Aguilera To Return To 'The Voice' In Season 5 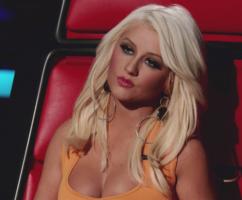 ) will return to 'The Voice' next season.

CeeLo Green and Aguilera had taken a season off from the hit NBC show to work on other projects while Shakira and Usher filled their coaching chairs.

Aguilera has apparently just signed the deal that will bring her back to 'The Voice'. However, Green, while expected to be back, still hasn't officially committed to next season.

Viewers will notice a definite change when Aguilera returns to their screens as the singer is now back to a slimmer figure after being repeatedly asked about her weight in recent years.

Does that mean less of her trademark cleavage on the show? We'll have to wait and see.

As for Usher and Shakira, they could return for future seasons. But for now, Shakira wants to spend more time with her newborn and Usher has a movie lined up.