Christian Slater Claims His Father Threatened to Kill Him 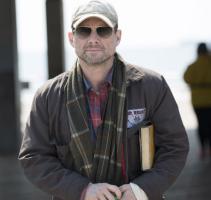 Christian Slater is being sued by his estranged father for $20 million.

However, in his own filing Slater reveals that his father once tried threatened kill him and his mother.

The 'Mr. Robot' star says his father suffers from schizophrenia and was taken to Bellevue Hospital in 1972 "in a strait-jacket after threatening to kill both my mother and me."

"I have always understood that plaintiff had pushed my mother into a street in front of a car when she was pregnant with me," he says.

Thomas Knight Slater sued his son for $20 million in February after he described him as suffering from manic-depressive schizophrenia in an interview last year.

Slater, who has been estranged from his father since his parents divorced more than 40 years ago, defends the statements he made in the interview.

"I genuinely believed that Plaintiff was 'manic-depressive schizophrenic'," he says and that he learned of his father's mental illness through "multiple sources."

He notes in the filing that he has paid his father "for his agreement to see a psychiatrist to address his schizophrenia."

His father, who is also an actor, claims that the interview has caused him to be blacklisted from Hollywood.