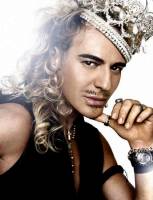 The fashion house says that Galliano has been immediately laid off and the process of firing him has begun, pending an investigation into an alleged anti-Semitic incident at a Paris cafe last week.

In the video, Galliano declares "I love Hitler" then goes on to say "People like you would be dead. Your mothers, your forefathers, would all be f--king gassed."

Under French law the making of anti-Semitic remarks qualifies as "incitement to racial prejudice," a criminal offense that can carry a sentence of up to six months in prison.

Meanwhile, Natalie Portman, who has an endorsement deal with Dior, says she doesn't want to be associated in any way with Galliano.

"I am deeply shocked and disgusted by the video," says the Oscar winner. "In light of this video, and as an individual who is proud to be Jewish, I will not be associated with Mr. Galliano in any way."

"I hope at the very least, these terrible comments remind us to reflect and act upon combating these still-existing prejudices that are the opposite of all that is beautiful."