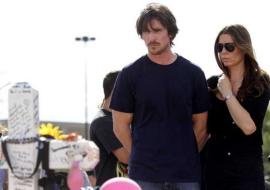 Assistant vice president of surgical services at sister hospital, Swedish Medical Center, Janie Bowman-Hayes said she and co-workers were invited to a luncheon at The Medical Center of Aurora to thank staff who tended to victims.

Bale spent the day thanking medical staff, police officers and visiting a memorial to victims near the theater.

He visited with victims still recovering in the hospital and even posed for a few pictures at their request.

"He did this out of his heart, and you could really tell," Bowman-Hayes said. "It was so sincere. It was just, 'Thank you."'

Shortly after the shooting, Bale said "Words cannot express the horror that I feel. I cannot begin to truly understand the pain and grief of the victims and their loved ones, but my heart goes out to them."