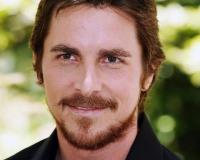 Christian Bale thinks George Clooney and other actors who complain about the pitfalls of fame and dealing with the paparazzi should "just shut up" and "stop whining."

"It doesn't matter that he talks about it. It's like, 'Come on, guys, just shut up. Just get on with it and live your lives and stop whining about it," he tells WSJ. Magazine. "I prefer not to whine about it."

The 40-year-old actor, who has a reputation for having a short fuse, says he has to do his best to control himself.

"I was in Italy with my wife," he recalls.

"I would go to work; she would leave the hotel. There would be a man who stood outside and say the most obscene things imaginable to my wife."

"I know what he's after; he has a strategy there. Am I able to say I'm not gonna give him that satisfaction of angry Christian Bale coming after this man?"

"But equally, he's killing my humanity and my dignity as a husband if I do not, and he knows this. So you've got a choice."