Chris Zylka Over Lucy Hale Split: 'She Decided She Was Too Good' 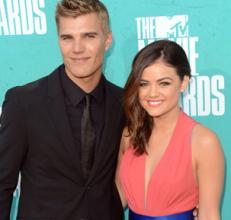 After a fan told him that his girlfriend was "gorgeous" on Twitter, Chris Zylka revealed that he was no longer with Lucy Hale (photos

"Don't have a girlfriend," he replied. "She decided she was too good."

Zylka, best known for playing Flash Thompson in 'The Amazing Spider-Man', and the 'Pretty Little Liars' star had been dating since the beginning of the year.

But it doesn't sound like their split was amicable.

"There's a difference between celebrities and movie stars. Celebrities fade away, while movie stars stick around forever," he followed up.

Later he posted a quote from a Smashing Pumpkins song, hoping to hit the message home: "Despite all my rage I am still just a rat in a cage, someone who said what was lost can never be saved."

For her part, the 23-year-old Hale didn't take the bait and instead mused about some advice she received from a fellow actress.

"You are worth what you think you deserve," she said. "Regard yourself highly, treat yourself well, work hard and never settle. The rest is just patience."