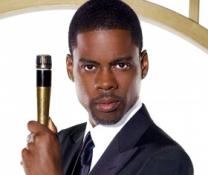 In an interview with New York magazine, Chris Rock wades into the debate on race.

The comedian says he would love to be a '60 Minutes' correspondent and conduct interviews in the town.

"I'd do a special on race, but I'd have no black people," he says. "We know how black people feel about Ferguson — outraged, upset, cheated by the system, all these things."

Rock then explains that he doesn't think African-American's have changed and suddenly become equals or more deserving. Instead, he believes what's "progressed" is the way they've been treated.

"Here's the thing. When we talk about race relations in America or racial progress, it's all nonsense. There are no race relations," he says. "White people were crazy. Now they're not as crazy."

"To say that black people have made progress would be to say they deserve what happened to them before. To say Obama is progress is saying that he's the first black person that is qualified to be president. That's not black progress. That's white progress."