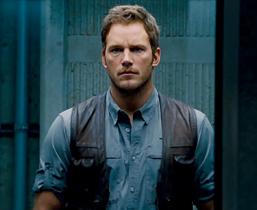 In a conversation with Stephen Colbert, Chris Pratt talks about starting out in Hollywood and promises the 'Late Show' host that 'Fat Pratt' will be back.

"Yes, I do," Pratt says when asked if he misses his chunkier body. "My wife does too."

"She likes to cook and I don't get to eat as much of her cooking as I used to. Yeah, I miss him but I mean he's not gone forever. He's just on vacation for a couple of years but he's coming back."

Pratt also tells Colbert that he actually lost money for the chance to act alongside Amy Sedaris, Philip Seymour Hoffman, and Stephen Colbert in 'Strangers With Candy' since he moved to New York for the role because the film was only hiring local talent.

He also revealed that he used to be a door-to-door coupon salesman. And a pretty good one at that.