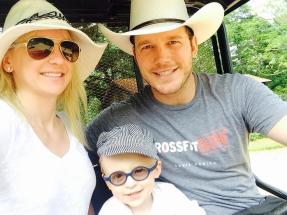 According to EW, Pratt will star in an early 2017 episode as Nick, a charming horseback riding instructor who Faris decides to pursue.

The couple have appeared in a handful of films together since they married in 2009. However, this will be their first television appearance together.

Pratt is in the midst of filming the 'Jurassic World' and 'Guardians of the Galaxy' sequels.

'Mom', which is now in its fourth season, returns on Thursday, October 27 on CBS.