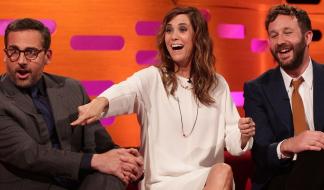 Appearing on the BBC's 'Graham Norton Show', Chris O'Dowd, Kristen Wiig and Steve Carell were chatting with the host until a big fly interrupted the program.

But that's also when hilarity ensued. Wiig was amazed by "the biggest fly I've ever seen" and Carell gave his life tip on how to kill a fly.

"You get it everytime. I so hope he comes back!," he dared.

And the fly did return -- just not in the manner any of them expected.

It happened when O'Dowd took of a sip of his glass of water without realizing that the fly had landed in it.

"Oh my God," he said after pulling the fly out of his mouth.

"Did you just drink the fly?," Norton asked. "Is he alive in your hand?"

"I gotta tell you, I chewed it," O'Dowd warned. "I took a drink and I realized that I didn't have any ice in there."

O'Dowd dropped the now dead insect on the table as Carell covered it with a napkin.