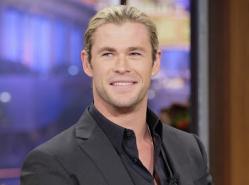 Chris Hemsworth is apologizing for dressing up as a Native American.

This after a photo of the 'Thor' star in the outfit, which was actually for a Lone Ranger-themed party months ago, began circulating for Halloween.

"I would also like to take this opportunity to raise something that has been bothering me for sometime. Last New Year's Eve I was at a Lone Ranger-themed party where some of us, myself included, wore the traditional dress of First Nations people," he explains.

"I was stupidly unaware of the offense this may have caused and the sensitivity around this issue. I sincerely and unreservedly apologize to all First Nations people for this thoughtless action."

"I now appreciate that there is a great need for a deeper understanding of the complex and extensive issues facing indigenous communities. I hope that in highlighting my own ignorance I can help in some small way."

Hemsworth also says he's standing with the people protesting for the Dakota Access Pipeline. The pipeline is being built at the Standing Rock Indian Reservation in North Dakota.