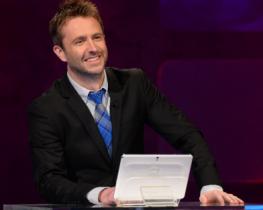 Chris Hardwick tells Jimmy Fallon about his unique 'Star Wars' droid ring bearer and wrestling Jawas at this wedding before recounting a tale about his bachelor party at Disneyland.

Rather than opt for everyone's favorite R2-D2 or BB8, Hardwick recruited R5-D4, also called 'Red' by Luke Skywalker in the original films.

The red and white-striped R5 line astromech droid was owned by a group of Jawas on Tatooine in the early days of the Galactic Civil War. Shortly before the Battle of Yavin, the Jawas tried to sell him to Owen Lars, but the droid's motivator malfunctioned, so he purchased R2-D2 in R5-D4's place.