Chris Evans: Robert Downey Jr Closer To Leaving Marvel Than I Am 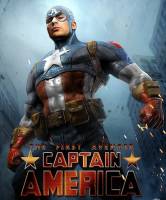 Chris Evans' contract with Marvel is complete after the upcoming 'Avengers: Infinity War' but the star is hinting he's not quite done as Captain America.

"I'd be lying if I said it wouldn't be hard for me," Evans says of possibly leaving Marvel. "But the passing of time and the passing of torches is part of the experience. Nothing lasts forever."

"There's a beauty in that departure, even if it can be sad at times. It's also joyful."

"I've had a great run. Superheroes are reinventable entities, like Batman or even James Bond. These movies find new incarnations and new ways to tell the story. I am all for it."

"However they want to proceed after Avengers 4, it's really up to them. I walk away with no regrets and endlessly thankful."

"When you're creeping on 36, working out is a little bit harder. Not impossible, but it just gets a little bit more daunting," he admits.

He's previously said "if Marvel wants me they got me" and Evans sticks by it, saying another 'Avengers' member may be likelier to leave than he is.

"Downey is far closer to reaching that point where he may walk away. And I don't know how you replace Downey as Tony Stark," says Evans. "I don't know who else can touch that."