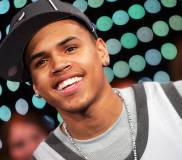 ), as part of a plea agreement that spared him any jail time.

Brown will be officially sentenced in August, but the terms of the plea deal call for him to serve five years of formal probation and six months of community labor. The 20-year-old singer will be able to do either graffitti removal or roadside cleanup for his service.

The hearing had been billed as the long-awaited public face-off between Rihanna and her one-time boyfriend, however, the guilty plea came as Rihanna waited in a private area of the criminal courts building so she did not have to testify.

The judge also put any short-term prospects for reconciliation between the two on hold as Brown was ordered to stay at least 50 yards away from Rihanna, or 10 yards at public events -– despite a request from her lawyer for a less-restrictive order. She told Rihanna it wasn't a one-way order and that she, too, wasn't allowed to get any closer.

She told Rihanna that, after Brown completes his required domestic violence courses, if the she wants to make the terms of the stay-away order less restrictive, she can request it for consideration.

Rihanna's lawyer claimed that she was "was fully prepared to testify and she would have told the truth about what happened that evening," but there's little doubt both parties involved wanted to avoid her taking the stand to recount Brown's attack.

Outside the courtroom, lawyers refused to discuss the status of the pair's relationship, and Brown's lawyer, Mark Geragos, tried to downplay the now permanent blemish on the young singer's record.

"This is a kid who has never been in trouble before, who wants to move past this," Geragos said. "He has accepted responsibility and will continue to do so. He embraces this as an opportunity to get his life back on track and his career back on track."

Suer Brown faces five years of probation after pleading guilty, but in the end it worked out better than Brown could have hoped as he avoided a sentence of more than four years in jail.