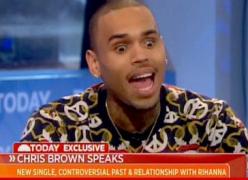 Chris Brown is blaming "emotional stress' from the "nonstop negativity" surrounding him for his non-epileptic seizure early Friday morning.

"His doctor tended to him this afternoon and attributes the NES to intense fatigue and extreme emotional stress, both due to the continued onslaught of unfounded legal matters and the nonstop negativity."

The 24-year-old spent 45 minutes in jail on August 6 after a judge revoked his probation and ordered a hearing in a May hit-and-run case, in which he is suspected of rear-ending a car stopped at a red light then refusing to give the other driver his license or insurance information.

The woman said she took a picture of Brown and a passenger "went ballistic" and shouted expletives before speeding off.

EMTs were called to the scene where Brown was recording on Friday at 1 AM. However, Brown refused treatment once they arrived.