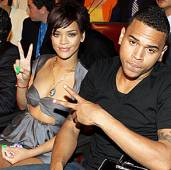 A week after the now infamous altercation, Chris Brown has released his first official statement.

"Words cannot begin to express how sorry and saddened I am over what transpired," Brown says without directly making referencing to Rihanna (photos

"I am seeking the counseling of my pastor, my mother and other loved ones and I am committed, with God's help, to emerging a better person. Much of what has been speculated and-or reported in the media is wrong," he says, adding he can't discuss it in detail until the case is resolved.

Brown also clears up that the status update on Facebook which takes a shot at Rihanna, is not him: "Those posts or writings under my name are frauds."

He turned himself in on February 8 but no charges have been filed yet. He is free on $50,000 bail while the case is under investigation.

Meanwhile, Brown's father, who happens to be a corrections officer, tells 'People' magazine that his son is reflecting on the unfortunate situation: "He's reflecting on this situation. He's very remorseful. He's very concerned about the situation and he wants to make sure that she's okay. This is unfortunate, this stumble, this situation. Hopefully, he will get past it. We all have our shortcomings. We all trip."

Rihanna's father, Ronald Fenty, has also spoken about, telling the mag he was shocked when he first heard about the incident: "I was really shocked because he's such a talented person. I didn't believe it."

"I know my daughter. There is some bruising. She will be all right. At some point, she will speak out. I hope she will stand up for women all over the world."

As for Brown, he says, "You think you know somebody, but you really don't. I hope he learned his lesson and that this will never happen to another woman. They seemed pretty happy... I don't know what went wrong."