Chloe Bennet: I Changed My Asian Last Name Because 'Hollywood Is Racist' 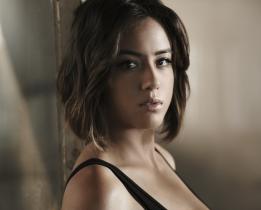 ) recently applauded Ed Skrein for stepping down from playing Major Ben Daimio in the 'Hellboy' reboot after an uproar because the character was supposed to be Asian.

But after one fan labelled the 'Agents of SHIELD' star as a hypocrite since she changed her last name from Wang to Bennet, she wasn't shy about responding.

"Changing my last name doesn't change the fact that my BLOOD is half Chinese, that I lived in China, speak Mandarin or that I was culturally raised both American and Chinese," Bennet replied.

"It means I had to pay my rent, and Hollywood is racist and wouldn't cast me with a last name that made them uncomfortable."

"I'm doing everything I can, with the platform I have, to make sure no one has to change their name again, just so they can get work. So kindly love, f--k off."

Skrein has said he was "unaware that the character in the original comics was of mixed Asian heritage" before accepting the part.