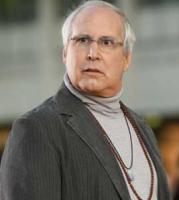 Chevy Chase has been admitted to the Hazelden Addiction Treatment Center in Minnesota.

The former 'Saturday Night Live' and 'Community' star checked himself in for treatment that his rep politely called a "tune-up." He said the actor "wants to be the best that he can be."

He previously received addiction treatment at the Betty Ford Center in California in the mid '80s after he became addicted to painkillers.

Chase said at the time that his "chronic and long-term back problems" contributed to developing the addiction.