Chelsea Handler Had Two Abortions At 16: 'I Happened To F--k Up Twice' 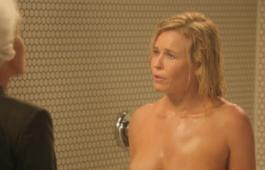 Chelsea Handler has revealed she didn't have one but two abortions when she was just 16.

In an essay for Playboy magazine's 'Freedom' issue, Handler says she's glad she had the freedom to choose what would become of her life.

Handler admits she became pregnant after having unprotected sex with her boyfriend.

"I just thought, 'Why not?' I can have a baby. Maybe I'll have twins and give them rhyming names," she writes. "Of course, the idea that I would have a child and raise it by myself at that age, when I couldn't even find my way home at night, was ridiculous."

"My parents recognized that, so they acted like parents for one of the very first times in my life and took me to Planned Parenthood."

She explains that she got pregnant once again later that year and was barely able to afford another the $230 for the abortion.

"Getting unintentionally pregnant more than once is irresponsible, but it's still necessary to make a thoughtful decision."

"We all make mistakes all the time. I happened to f--k up twice at the age of 16. I'm grateful that I came to my senses and was able to get an abortion legally without risking my health or bankrupting myself or my family."

Talking about the 1973 Supreme Court decision that gives a woman a right to an abortion, she says: "I don't buy that Roe v. Wade is in danger."

"Once you go forward in history, you don't go backward. That would be like the government saying, 'Okay, we're taking away your right to vote too. You can't introduce a black person and be like, 'Oh, I just got a slave!' That era is over."

Handler says instead of being criticized by those who don't agree with her, she's glad she made the "smart" decision.

"We have 7.3 billion people on this planet. Anybody who carefully decides not to become a parent – let alone a bad parent, which is what I would have become – should be applauded for making a smart and sustainable decision."

"I'd love for somebody to try to tell me what to do with my body. I dare them."